There have been alot of questions about which recoil system a customer might want for their MAX-11/15 so here is some more information.

I am not going to go into the details of the IRM (Internal Recoil Mechanism) while we are going through the patent process for the upper. When we have Patent Pending status, I'll show details, pix and video. We will have Patent Pending before the first unit is sold.

All I can say is that the upper with the IRM assembles on the the lower receiver with no modification to the lower receiver. There is a step you need to do before removing the upper to make it easier to re-install the upper once it is removed. If you forget this step, you will have to do a different step before you re-install the upper again. No screws involved. Not a bunch of complex parts to deal with. You will have to trust me that it is simple and convenient to use.

With the IRM, you can use any stock you want, including an AR stock. You can also use a Folding or Collapsible stock which is something you cannot do with the AR Buffer version.

With the AR Buffer version you have to use a stock system with an AR Buffer Tube, Buffer and Spring. With this system, you can experiment with different buffers and springs to tweak the system, if necessary, for different calibers.

So far, .223 Remington, 5.5x45mm and .300 BLK has been tested in both systems and they both work equally well in both systems. We know that some customers are going to want to try different calibers and the ability to tweak the buffer system may help with that.

In order to maximize production and get MAX-11/15s in customer's hands as soon as possible, we will be offering only one configuration- 5.56x45mm caliber and a 10-1/2" barrel.

We have received our determination letter from the BATFE and they have approved both versions of the MAX-11/15! We will start production right away and hope to have the first 20 ready in a few months. After the first run we will increase the quantity of each run with the goal of doing a minimum of 50 per 4-6 weeks. Since both versions were approved you will be contacted a month or two prior to the run that you are going to be in and we will ask you which version you would like (AR Recoil System or Internal Recoil Mechanism). There will be no price difference between the two options. The price for the MAX-11/15 will be finalized when the first production run is completed but it is estimated to be $2,995. We estimate to reach the end of the current list in approximately 18 months. We will continue to post updates of the status on our website.

We submitted the original prototype that was provided by MAK91 to BATFE Tech Branch and received an "Approval Letter". Yes, in theory, we could produce and sell that version right now. The letter specifically stated that if there were any changes in dimensions and/or materials, we would have to re-submit the design. We redesigned the upper and also came up with a "non-drilled" version. These versions have been at BATFE Tech branch for a while now and based on the latest conversation with the agent who it was assigned to, the determination should be finished in a couple of weeks. This is the same agent who made the original determination. He is familiar with the design and all of our past products and letters. The conversation was a positive one.


Spots on Waiting Lists are No Longer Transferable

Effective as of 04/11/2018: In order to maintain integrity of our waiting list and ordering process, product must be paid for and shipped to the customer on the list. Your spot on the list is not transferable under any circumstances. If you had contacted us in the past to transfer your spot to someone else and we updated our list to change it to their name, we will honor the change.

We have just finished the first production run of MAX-10/31's and will be notifying customers on the waiting list on Monday, 08/01/17. The next batch will be finished in about a month.

Here is video of the winning run for the 2016 Arizona State Subgun Match. This run won the Overall Winner Trophy and the Modern Open Class Trophy.
Richard Lage used a Lage Manufacturing, MAX-31 mk2 with 72 round Suomi Drum magazines and one Shockwave ZMAG-S 30 round stick magazine to win the match.

Congratulations to Richard Bhella for winning the Lage Challenge at the 2016 Arizona State Subgun Match!
Richard used a MAX-11 mk1 to win the Lage Challenge Trophy and $100.00 cash prize.
The Arizona State Subgun Match was on Saturday, October 15th. Richard Lage took first place overall using a MAX-31 mk2. The top 9 subgunners used Lage Manufacturing Uppers. Another great year for Lage Shooters! It was a long match with a lot of challenging shooting and I look forward to doing it again next year. Make sure to practice your grenade tosses :)

Here is a link to the official scores:
Click here for ASSM 2016 Scores

Garrett used a MAX-11 mk1 and a Bowers CAC9 suppressor to have the fastest run time of all the other shooters.


Here is a video of his winning run.

Once again, we are sponsoring the Lage Challenge Trophy and $100.00 cash prize at the Arizona State Subgun Match. This will be awarded to the top shooter at the match using a Lage Manufacturing upper receiver.

The 2016 Arizona State Subgun Match is Saturday, October 15th 2016. The theme for ASSM 2016 is Medal Of Honor winners. The seven stages of the match will be based on the citation from a MOH winner. We hope to see you there!

Lage Manufacturing employees are not eligible for this trophy and prize.

There are two major Subgun matches coming up this weekend, the Arizona State Subgun Match and the Knob Creek National Subgun Match.
I had posted these tips awhile back on UZITalk.com. Here they are again.

We have designed stock adapters for the EVO Scorpion and Sig MPX. Compatible with all of our stock adapters and folding mechanisms. Additionally, it is compatible with any ACE Rifle Stock patterned stock, folding stock mechanism with two #10-32 mounting screw holes spaced 5/8" (.625") apart. With the addition of our AR-15 Stock Adapter, a commercial or Mil-Spec' buffer tube can be added to attach an AR stock, SIG Brace or Shockwave Blade. 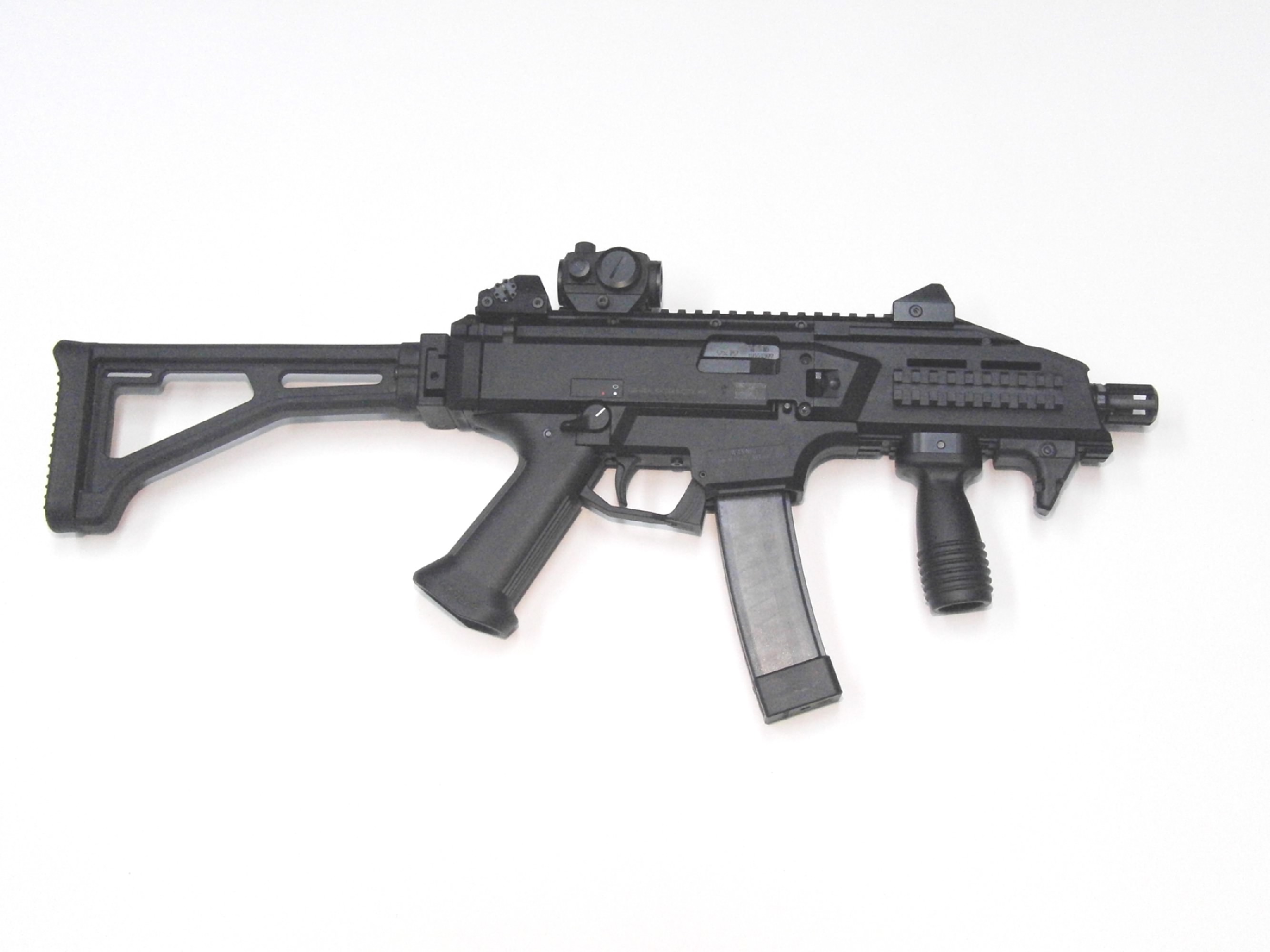 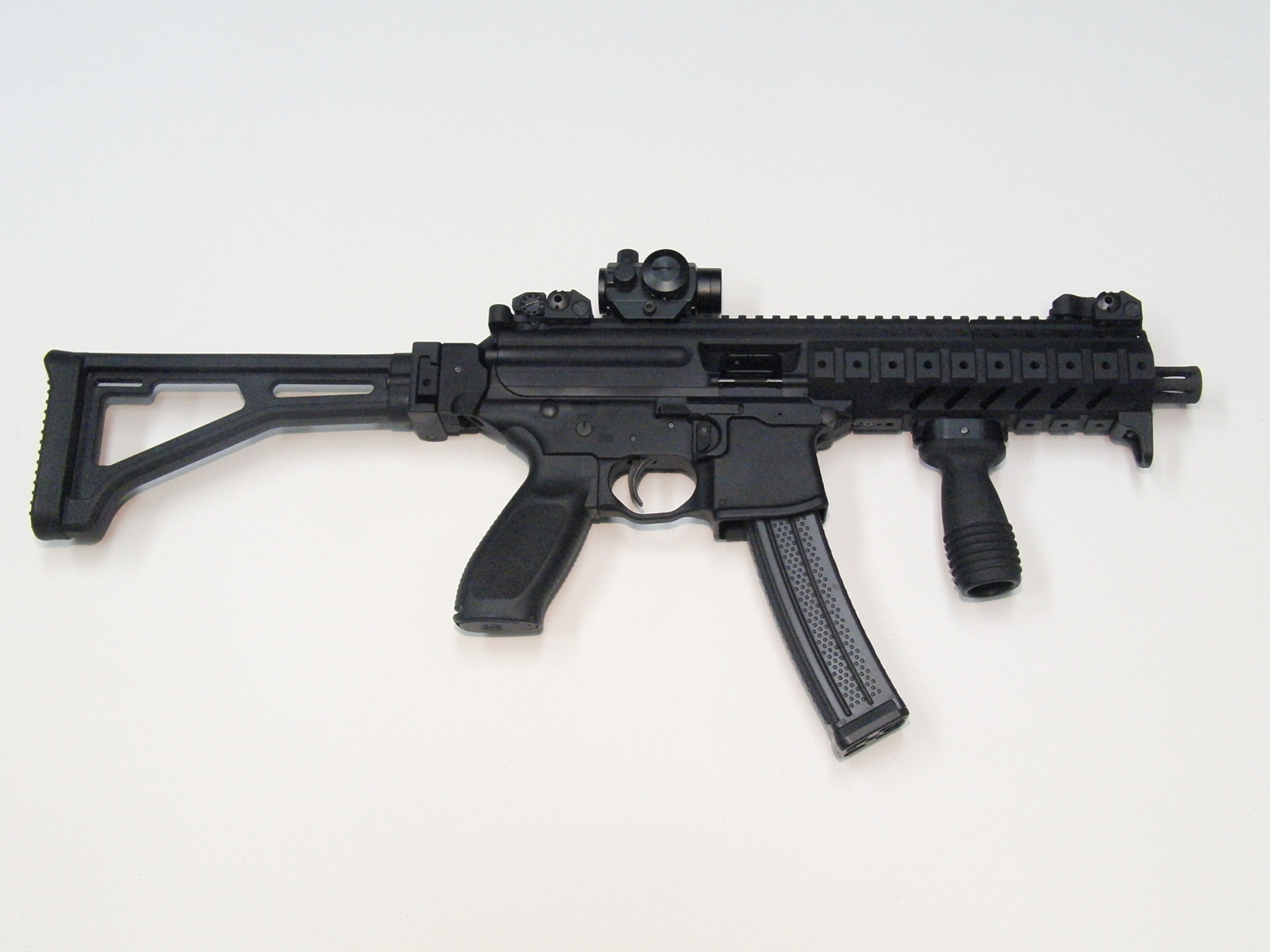 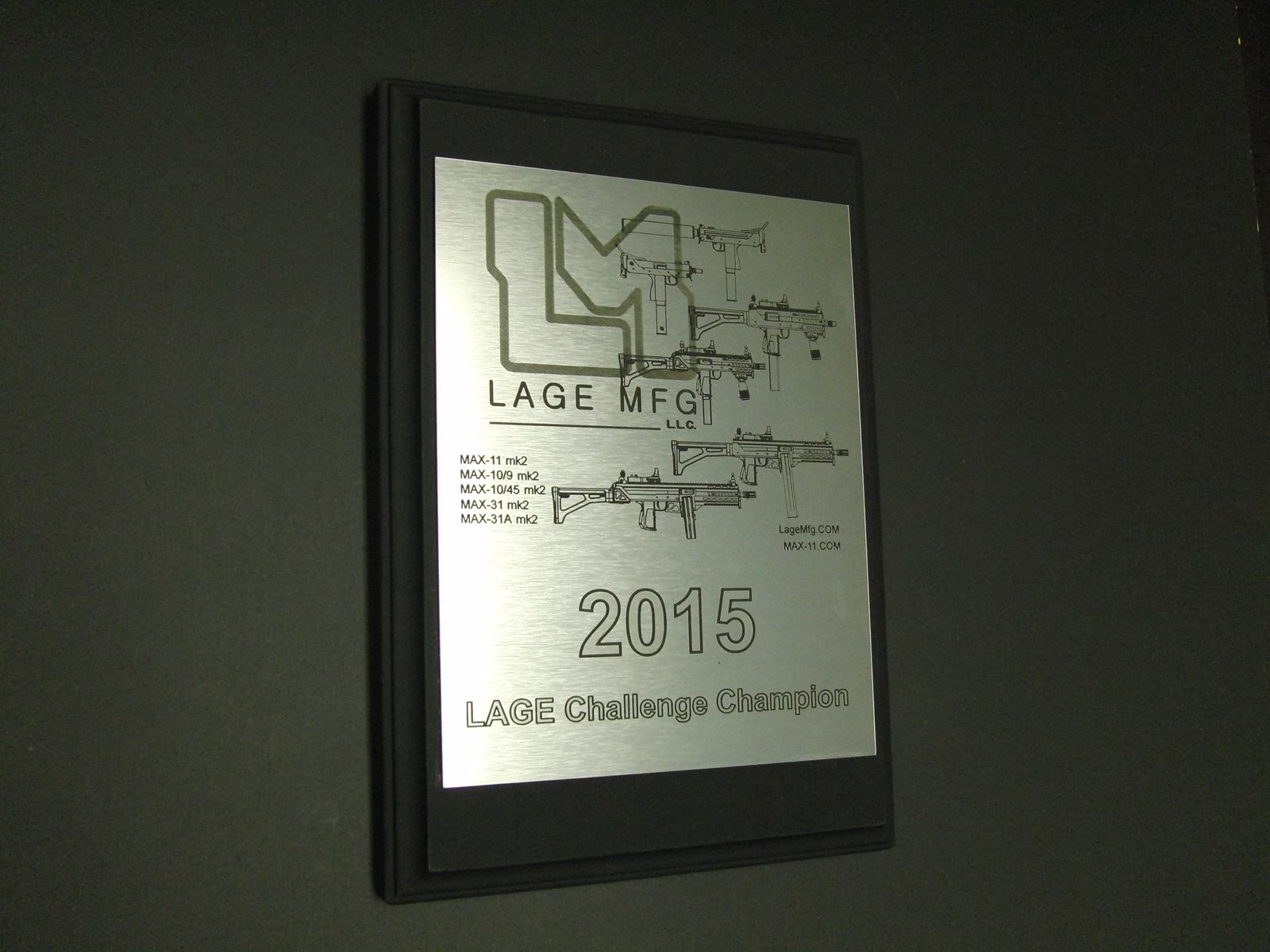 Once again, we are sponsoring the Lage Challenge Trophy and $100.00 cash prize at the Arizona State Subgun Match. This will be awarded to the top shooter at the match using a Lage Manufacturing upper recevier.

A Big Congratulations to Richard Lage on getting Top Gun at the Knob Creek Spring 2014 Subgun Competition! Kelli Sampsel also came in First Place in the Ladies division shooting a MAX-31! Austin Hipes placed 2nd to Richard by only 5.59 seconds shooting Open Bolt, Iron Sights with a MAX-31! Congrats to Chris Hipes on placing 3rd shooting a MAX-31 mk2 with a Closed Bolt and Optic Sights! Overall, a MAX-31 mk2 was used to win 1st place in 4 out of 5 of the classes!

Here is a link to the winning Top Gun run:

I brought my camera with me this time to Knob Creek and took around 200 pix of the match.

The 2013 Arizona State Subgun Match was yesterday and the scores are in.

Chris Huey is the Winner of the 2013 Lage Challenge Trophy and $100 Gift Certificate. Congratulations Chris!

Regarding the match, alot more props were used this year which made for a more enjoyable shooting experience, Stage design was fun, but challenging, and made for a great match.

Chris Hipes won the Top Gun Trophy at the 2013 Knob Creek National Subgun Match with a time of 105.26.

It was a challenging course of fire and he definitely earned it.

A big thank you to Paul Winters who designed and set up the match and the whole KCR crew that made it happen.

If you have not shot the Subgun match at Knob Creek Range, you are really missing out on a good time.

Centerfire Systems also carrys M31 Drum Magazines for $19.99 or $29.99 (depending on condition) plus shipping.

After much work and revisions, the website has been updated and re-designed. Please let us know if you have any issues accessing any of the website.

If you need replacement parts for your M-11A1, M-11/9, M-10/9 or M-10/45 RPB Industries is the place to go. RPB carries all of the fire control parts for these guns as well as replacement full auto bolt assemblies and upper receivers. You will not find a better source for these parts, or a person who knows more about these guns than Russell at RPB. RPB carries more parts than are shown on their website, so if you do not see a part you need, give them a call.

For metal magazines for the M-11/9, M-11/A1 and M-10/9, Recon Ordnances' are hard to beat. These magazines are converted from South American PAM-2 magazines and are reparkerized. Jerry is a great guy and stands behind his product. You can order from him with confidence. Magazines are $30.00 each plus shipping.


Maintenance of your Zytel Magazines:

If you are using Zytel magazines with your MAX-11, you will need to keep them clean for optimal performance. Any carbon fouling or grit will cause problems with the plastic follower against plastic magazine body.

I typically clean my Zytel magazines before every subgun match; once or twice a month. Also, keep in mind that using a suppressor with the MAX-11 will accelerate fouling of the magazines.

Here is the cleaning procedure I use:


A forum for "MAC" owners, UZITalk.com:

Regardless of which "MAC" you own, you will find a wealth of information at the MAC-10 Talk forum on UZITalk.com. I regularly post on this forum and view it a couple of times a day. The forum contains great technical information, product reviews and great pictures of "MAC's" in all configurations.